A baby snake found in a chair while chilling (photo)

There was a bit of panic at a chilling spot recently after a baby snake was found inside one of the holes of a plastic chair at the center.

In a video that was shared online, the snakelet was seen crawled up inside the hole of the chair. A vigilant individual spotted the reptile and made a video of it as he held a flashlight against it so as to see it clearly. 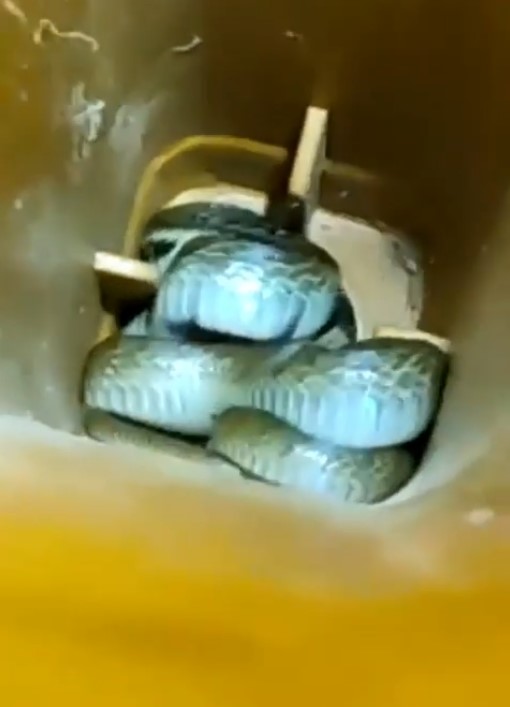 Watch the video as you scroll,

In other news, a 27-year-old Pennsylvanian man, Elliot Senseman, has died days after he was strangled by his 18-foot-long pet boa constrictor.

It was gathered that the long and thick reptile wrapped itself around Elliot’s neck which led to oxygen supply being cut off from his brain.

He was pronounced dead on Sunday, July 24, after suffering from accidental asphyxiation that caused an anoxic brain injury.

The Police speaking on the incident said they received a call from a relative of Senseman on Wednesday, July 20, and went to his home.

When they arrived, they saw him lying on the floor unresponsive with the 18-foot boa constrictor wrapped around his body. The snake’s head was far from his body so they decided to shoot it.

“Our officers responded and shot the snake with hopes of freeing the victim,” Lt Peter Nickischer of the Upper Macungie Township Police said.

The snake did not die immediately and slithered away before it was euthanized.

Lt. Peter said he has never seen anything like that in his 19 years of being in the police force and that the snake was “very long, and very thick.”

Sadly, Senseman passed away four days after the tragic attack.

The grieving mother of the deceased said her son often rescued snakes and was “still working with” the boa constrictor because it was very aggressive.

“REVEALED!! Kizz Daniel Decided Not To Perform Because Of His Gold Chain, Show Organizer Speaks Up (Fans reactions)
“GUESS WHO!!?? Bella Shmurda Reveals Some Of The Artistes On His Forthcoming Album
“NEW HIT ALERT!!! Davido Previews His Unreleased Banger With Pheelz
“See Bella Shmurda Dress To BBNaija Live Show
Loading...
No Comments Yet Drop a Comment